In class we have been working on how songs, besides have a nice and sticky beat, the lyrics it has can have a meaningful message. In class, we had to pick a song to analyze, I chose «Revolution» by The Beatles.

One part of the song which really stuck with me after the first time I heard it is when it says:

«You say you got a real solution
Well, you know
We’d all love to see the plan»

Because it is what happens to most people, everyone has ideas, ways in which to fix what is wrong, but the thing which always remains unanswered is how would you do it.

I understood that the song talks about how someone wants to make a revolution, which is obvious provided you have read the title, but the song goes deeper, talking about first you need a plan, the destroy what they don’t like. From the lyrics one might think this is a song about how they want to change the political system, «chairman Mao» and «change the constitution». Moreover, the voice is doubtful, because we can see how the voice is also concerned about the how and why:

«You say you want a revolution
Well, you know
We all want to change the world».

The rhyme is between the first and fourth line.

I have to say I agree with Lennon, there is no need for violence in a revolution, as long as you talk with people and through smooth words you can convince them change is needed, not by imposing fear or shouting in the streets that you are going to take down the institution. 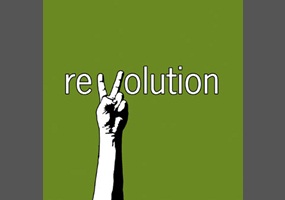 I believe this has been a very cool activity because having added music gave what we are used to doing a twist. Music is so different from poetry, and yet so similar, so sometimes it is good to give it a look and analyze a song in the same way you analyze a poem.