For the last 2 literature classes we have been analyzing and talking about the poem » Love III» by George Herbert.

In our first class we took notes about Herbert and the poem in Evernote.

In our 2nd class we analyzed the poem.

Love iii from Pato_Ch
The poem is about a person that feels guilty of sin and Love who is God. The guy says that Love welcomed him but he rejected his love because he feels he doesn’t deserve it. Later on Love tells him again to come to him but the guy was surprised and said « I the unkind, ungrateful?«. Finally in the third stanza the guy said yes.
My conclusion is that love is always waiting for you and wants by his side, it doesn’t mater if you are a liar or honest. He loves you anyway.

Enjambment: moving over from one line to another without a terminating punctuation mark.

In our third class we learned new literary terms. 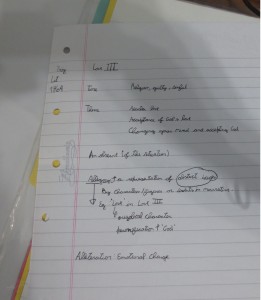